People Tree, a UK Fair Trade retailer (that I’ve been meaning to devote a post to), just launched their Rag Rage campaign to stir up consumers to demand both openness about production standards from major retailers and better working conditions for laborers in response to the recent Bangladesh factory collapse. 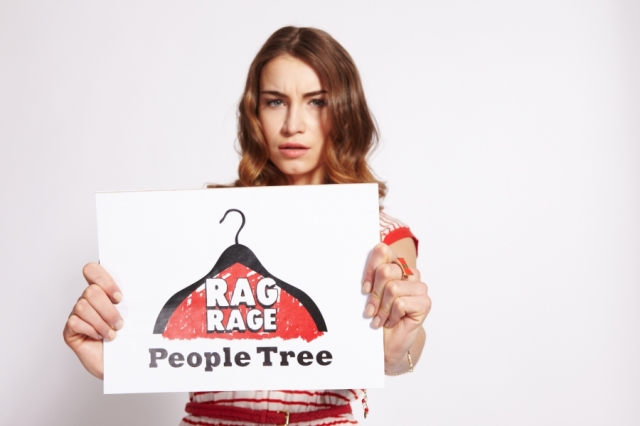 Though they’re targeting the British market in particular, I think the campaign could be a very effective way to not only to demand change from influential retailers but also influence a larger market of consumers to more carefully scrutinize their purchases. Though I find it troubling to immediately jump to a political platform as soon as tragedy strikes, the Dhaka factory collapse serves as a monument to the brokenness of the fast fashion industry as a whole and it’s helpful that people have no choice but to see the problem through literal images of rubble and chaos (even as I write this, I recognize that it’s morally troubling to find a practical use for absolute tragedy, but the fact remains that it is affecting people toward positive change).

According to the New York Times, in an article published a day after mine, the collective voice of ethically minded consumers is growing loud enough for major American retailers to hear:

“There’s real demand for sweat-free products,” said Ian Robinson, a lecturer and research scientist at the University of Michigan who studies labor issues. Consumers “don’t have the information they need, and they do care.”

Things are changing. We’ve just got to keep plugging along.

What news have you heard on the Fair Trade front lately?

What are your thoughts on turning the Bangladesh tragedy into a political platform?